The fact that I need such a massive catch-up post...one that is already outdated without anything really recent...should excuse me from writing clever, detailed text. So--without any frills, this is what I've got:

We promised ourselves that when we lived in a home we'd start a garden and develop some food storage. After lots of self-prodding, we've made SOME progress. Here we have a picture of some basil and tomatoes from our garden, followed by a photo of some peaches that I canned (CAN you believe it? hee hee). We also canned tomatoes, oven-dried tomatos and basil, prepared 72-hr kits, and bought enough oats/beans/wheat to last two months. I say this not to brag--well, just a little. 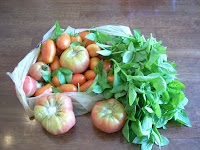 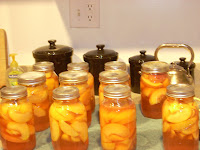 Our great friends Jeoff and Rachel (featured on this blog before) threw a marvelous birthday party for newly four-year-old Bekah, pictured below. She is biting straight into her cake (and Wilks family tradition). Note the gourmet-ness of this cake--Rachel is the crepe chef and does nothing part-way. She is a Martha in the Making. 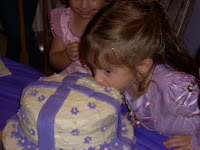 The party theme was, naturally, princesses. Mayumi was (kindly) invited, although not really a part of Bekah's peer group. 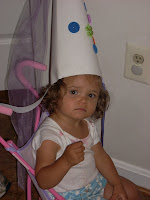 The darling Nate was nice enough to send me off to NYC for a weekend (and my NYC friends were kind enough to receive me). Here's us out front the one show I saw: Burn the Floor (feature ballroom dance). 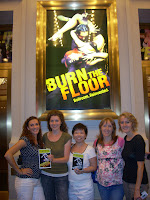 And now for a few Yumi Muvis:

Mayumi is starting to feed herself. She's not much better now then at the time of this video (at least three weeks ago). She DOES, however, say 'please,' 'Kids Klub' (where she goes when I work out at the gym), and many other words in Arabic (I think she's brilliant).

Mayumi's closest friend (in age, at least) is Juliette. These two girls have been 'playing' together for nearly a year, but I think only recently realized the other existed. Now, they are even trying to say each others' names. Juliette has it easy; she says 'mmmm mmmm mmmm' to refer to Mayumi. Yumi, however, isn't quite up to three consonant words yet, but she's trying. We THINK she refers to Juliette as 'Jushbab.' We think.

Mayumi's favorite place to play is Rachel's house, which was created for young children (unlike ours). Here she is, with loads of other kids, entertaining themselves while their mothers are visiting teaching or being visit taught.