I have been conducting a trial homeschool week with my oldest and have been sending daily email reports to family and a few friends who are also interested in homeschooling (or have kindly suffered through as I have talked to them to death about it...).  It only just occurred to me that I should post this on my blog.  So I am going to copy in here the entry on Day Four (today) but load a few pictures from previous days.  I'll insert captions so you get an idea of what is going on in the photos.  And just a quick background: I MAY homeschool this year and the primary reason for doing it (as you'll see below) is out of a love of global studies and the desire to keep up Mayumi's budding interest in the topic.  So here goes: Day Four. But be warned--this is a LONG and RAMBLING email I did not intend to make public.  So, forgive.  I would, however, appreciate any thoughts, advice, etc.

Today's topic: Ancient Egyptian Work.  We started with a story about Moses parting the Red Sea.  I think I was trying to incorporate a Bible story into my lesson and thought I could segue from Red Sea to the Nile and from there talk about farming, washing, etc.  In other words, "work."  I will share a little snippet of what happened in order to illustrate my current dilemma.  Two sentences into the Moses/Red Sea story I suggested we look at a map and grabbed one of the millions of children's books I got on the subject from the library. This was an illustrated Bible Story atlas. Perfect.  I had Mayumi read the word "Contents" and then search for the word Egypt.  Fine.  She found it and I asked her what page it was on.  We got stuck here: turns out she doesn't know/recognize the number "18."  Hmmmmm.  So I went into a tangent lesson on the 'teens and counting up from ten...and I lost her.  She was bored.  And she didn't get it.  I had my pencil and my paper and I was tossing out little math equations and she just looked at my blankly.  I was frustrated.  She was bored.  I finally gave up and we moved on...and I'll refer to this experience in a moment.

But first--we eventually got to the topic of washing clothes in the Nile and then I said we would conduct an experiment.  I quickly readied two buckets: one with a bottle of basic washing detergent sitting inside along with a dirty white shirt and the other containing the ingredients to make basic homemade laundry detergent (sodium carbonate, bicarbonate, and salt).  I also had the Egyptian white dress Mayumi made on day one and subsequently stained with tomato sauce.  I said we'd conduct an experiment.  I had her write the date in her journal and the phrase "which one?"...meaning, "which method will do a better job of washing out the stains?"  This was pretty laborious...even though it was her fourth day writing the date she still labored.  And she isn't as thrilled about writing in her journal as I thought she would be.  Clearly, it is hard...and I hope I am not turning her off to it.  But I'll address that in the "dilemma" section below.

So we went outside and had a good time mixing the homemade soap and whacking at the stains.  See the attached pictures of Yumi washing and hanging her dress out to dry (subsequently soaked in the massive downpour in the afternoon...). Fine.  Then we had to rush off to pick up Emi from camp.

1) Maybe kindergartners really SHOULD learn the basic subjects in targeted, isolated lessons?
2) Maybe kindergartners, even bright ones, cannot really grasp the concepts of civilizations and would be better off just learning the basic subjects in a hopefully fun, but definitely targeted, way (see concern #1).  In other words, is my idea to naturally teach her skills (like counting up from ten, for example) in the middle of a social studies lesson really very 1) practically and 2) good for her development?  Hmmmm.
3) If I conclude from concerns #1-2 that, in fact, I really should just teach her math as math and reading as reading (at least NOW, while she is still a new learner), doesn't that defeat the main reason why I decided to try this out?  (I decided to try this out because I want her to learn things that other kindergartners never get to learn, like geography and world religions and Arabic...).
4) Several times today (no joke) I concluded that she really would be better off studying in a traditional manner, under a trained professional, who actually knows how to teach math, has supplies, teaches things in a developmentally appropriate way, etc...and for about five minutes I'd feel calm.  I knew it was right.  And then suddenly I'd remember: but IF she goes to regular kindergarten then for 6.5 hours of the day she'll NOT be learning about the world, its languages, its people, its religions, its civilizations.  Yes, she'll be learning how to read and do sums in a developmentally appropriate way but for 6.5 hrs of the day NO ONE will speak to her of Egypt or show her a map of the world or ANYTHING.  No one expects a kindergartner to know the names of the continents, do they?  But I DO!!! No one expects a kindergartner to know the name of the current US president...but I DO!  So how CAN I sent her to kindergartner when she WILL learn some things but not OTHER things (things that I think are vastly more interesting...)?
5) On a different note: I thought a lot today about how, if I homeschool Yumi, she is just going to have to tag along to the grocery store, Emi's playdates/dance class, visiting teaching appointments, doctor's visits...all while she SHOULD be learning.  If not in public school, than in "home" school (I realize that she can be learning outside of the home but we aren't talking about field trips here....we are talking about grocery shopping).  I cannot push all those things off to quiet/nap time or the afternoon.  If I do, then my homework/housework/fitness will all suffer.  No, if I homeschool her, I will have to do those things during the time that I should be schooling her.  And that feels wrong.  What do you think?  It feels wrong.  So then I start to think "alright, homeschooling isn't right for us, at least not right now..." and then five minutes later I go through the crisis I described above under #4.  Let me add her that I realize she CAN be learning anywhere we go.  Surely.  I am normally good about teaching and talking to my girls wherever we go but I am especially vigilant about it now.  Sure, while at the store, I can ask her to count things or name things or illicit questions and conversation from her.  Sure.  But is it right that on the days Emi is NOT at preschool (Mon, Weds and Fri), Mayumi may get very little one-on-one instruction?  That it may only happen while I am I preparing dinner? 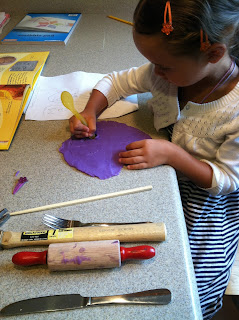 Carving a cartouche out of play dough.  We discussed shapes, tools, etc. 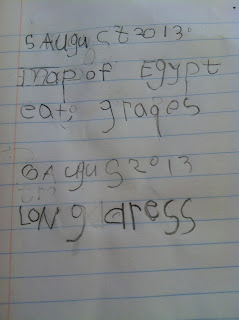 A journal sample.  You can see her entry for Day One (she learned ancient Egyptians ate grapes) and Day Two (they also wore long dresses). 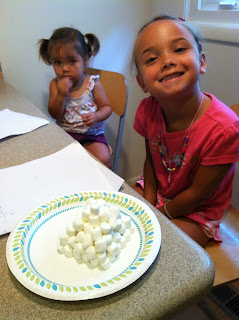 Day One: Making a pyramid out of marshmellows.