I love to read. I love to read so much that my brother once offered to attach a book holder to my bicycle handlebars so I could ride and read simultaneously. You might think a bit extreme, but nothing...not even a shower...could separate me from a book when I was a kid. More than once I slipped water-warped paged books back into the book return at the library and hoped that I wouldn't be charged.

I checked out so many books at a time that I often had trouble locating them all in time for return. Thus, one day while at the library, I was told by a stern-faced librarian that I wouldn't be allowed to check out my stack of 30 new books until I returned the 50 already loaned out to me.

I was devastated, and desperation can make villains out of even the most innocent people. I loaded up my sister Monique's Beneton book back full of those 30 Nancy Drews and Babysitter's Clubs and slipped around the security gates and out the door of the library. I had no intention of STEALING the books--I simply wanted to read them! I fully intended to return them within two weeks or so.

One hour later, however, I was waiting with my siblings at my father's nearby office and feeling the guilt of my crime weighing heavily around my neck, not to mention my BACK. I knew I had to return those books immediately. Assuring my siblings I'd be right back, I dashed back to the library, intending to slide the books back in the door and be gone.

In my agitation, I hadn't thought about the security gates and charged straight through them with my contraband. Alarms went off. Lights started flashing. Iron gates crashed down around me and, worst of all, the stern-faced librarian was trudging toward me, her footsteps thudding like the collapsing pillars in an Indian Jones temple.

One week later found me, my parents, and a panel of concerned librarians in a third-floor conference room in the library. My crime, I was told, was worth $104.50, which totalled approximately 20 hours of labor at minimum wage. And thus my summer plans were sealed: I spent several hours two days a week shelving books for what seemed like eternity.

I am happy to say that this sad tale did not cure me of my love of books. I still adore them, and would like to recommend one Nate and I just listened to. "The Graveyard Book" by Neil Gaiman. Read it! Watch Neil read it himself online! You'll be so glad you did.

I have also spent much time building Mayumi's library, and she has an obscene amount of books. We've read so much to her that she already has no problem turning the pages herself. The funny thing is, she turns the pages faster than we can read...as shown in this video. Enjoy! 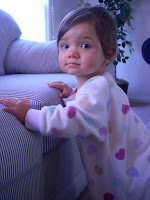 I have the privilege of being the mother of Mayumi Aziza Ayer, age 9 months. She is an exquisitely beautiful little girl, with a delightful personality to match. Motherhood is hard in ways I never expected, primarily the fact that I am in so in love with this little girl that I simply can't give up my privilege to be her primary caregiver. Thus, I have had to get creative in finding opportunities to keep up my professional self (in lieu of returning to work). Being Mayumi's mother has had many unexpected 'side effects.' I used to count on my 'Jamila Charm' to get me what I want in the world, but all I need now is Mayumi, preferably in a front pack and smiling at whatever hapless victim is in front of me. No one can deny her anything.

I've taken millions of photographs of this little delicious baby and, naturally, they can't compare to the real thing. But let me share a few of my favorites with you. 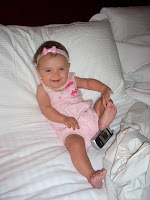 Sometimes Mayumi can't decide which is more diverting--a cell phone or her own feet. 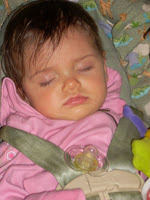 This is rare--Mayumi doesn't really care for sleeping in her carseat. She used to LOATH her carseat, back when we lived in D.C. and rarely used the car. I still rarely use it (we only have the one and Nate drives it to work on cold days (bikes on others)), but she's grown much more used to the idea. 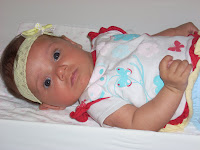 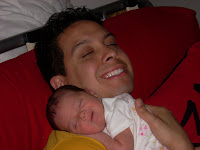 Nate was sold the moment he saw his little girl. As is often the case, daddy is Mayumi's favorite person in the world it would seem.
Happy Birthday my little darling cuteness!!!
Posted by Jamila at 10:56 AM 3 comments: 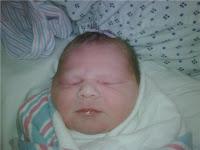 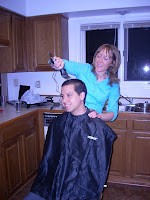 In other news, I learned how to cut Nate's hair! Here I am, clipping Nate's hair (for the first time) in my good friend Rachel's kitchen. Rachel (of crepe fame, c.f. "Crepe Night") knows all things, including how to use clippers. She guided me through this scary first experience. "Number three on top, number one on the sides." Nate now looks like a cadet. 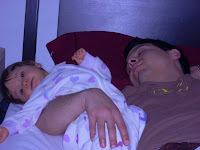 Mayumi has a tendency to wear Nate out (she takes after her mother).
Posted by Jamila at 2:32 PM 2 comments: 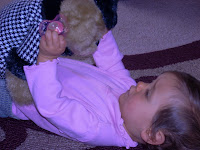 Mayumi's Auntie Monique sent her Audrey, the Fashionista Bear when she was still in utero. Audrey is, as her name suggests, in the highest of fashion. Mayumi loves Audrey and, at times, can only be consoled by her.

Our baby loves to laugh. Check out Mayumi giggling with her favorite person in the world--her daddy. 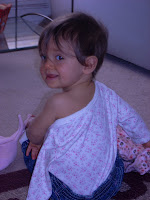 I left Mayumi alone for a few minutes the other day and I returned to find her as you see her here...Tarzan-like. Like me, she is probably happier with less on. You may notice her jacket and hat sitting next to her; while not quite arctic weather, it has been cold here, and she has to get suited up before going out.

Sadly, I am experiencing trouble with "Blogger" (anyone else?) and I cannot upload one of her latest videos (believe me, we have MANY). It features her conducting another circus-trick with a balloon. Alas, maybe I'll get it successfully posted at a later date.
Posted by Jamila at 5:57 AM 2 comments: 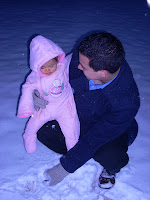 Mayumi experienced her real first snowfall this week. Tuesday it was, I believe. Snow fell the entire day and covered our town with a beautiful white blanket. That evening we cleared away the snow from our front walk and sidewalk, feeling very responsible as home owners. This turned out to be a big mistake; 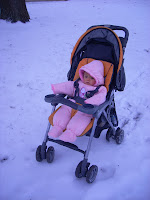 later that evening it began to sleet and by morning everything was covered with a thick layer of ice. Pavement that had been covered by snow was now covered with a very crunchy, nearly impenetrable slab of snow. Pavement (like ours) that had been cleared of snow, however, was snow shear ice. Sigh. Having stayed in the previous day, I had to get out. I made plans to visit a friend who lives (normally a 15 minute walk away. About 40 minutes into this walk, however, we had to give up. It was either too slippery OR impossible to move forward in chunky snow. Alas! I am pretty certain Mayumi had a great time. 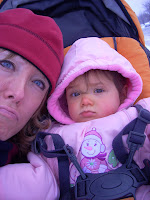