I haven't taken any good videos of Mayumi lately and I promise to repent. In going through a few older ones, however, I found a little one I don't believe I posted. This is primarily for the true Mayumi fan, who lives for even the most mundane pieces of news about her.

This clip features Mayumi eating some fruit, which is something she loves. What I wish I had a clip of is her eating blueberries. Who knew that one little girl could stuff so many blueberries in her mouth at one time?

Then there are apples. She attacks them eagerly, and smacks her lips after taking the last bite...dislodging the hundreds of bits of apples that have sneaked back OUT of her mouth and onto her chin after she's gummed them for a while (she DOES have five teeth but you have to give a baby a break...).

We were treated to a delicious dinner at by our wonderful friends Lindsay and Mike the other day (c.f. exotic Korean wedding ceremony a few posts ago) and they served a fruit plate for dessert. I don't know if anyone actually got to eat any of it, as Mayumi pretty much assumed responsibility for it.

Posted by Jamila at 5:20 PM No comments:

SISTER!!
Surprise! Many of you viewing this had no idea that I was expecting. Don't worry--I basically have kept this a 'secret,' telling only those who have seen me and asked.
So, there must be something about the level of estrogen in the Johnson clan, because this little girl will make the fifth of ONLY granddaughters in my family!
Now I know that ultrasound photos are, at best, vague (at worse, downright frightening), so we chose the 'cutest' one: her FOOT. :-) I love it. I love Mayumi's feet and I am sure I will love the feet of this little baby girl.
According to the radiologist, she is perfectly healthy and sound in every way. That is great news! She was moving around and around as we were viewing her. Hopefully she'll KEEP moving since she was (as of this afternoon) head up, or 'breach.'
Nate and I already have started our list of names. I am sure you can expect I am vetoing all of the 'biblical' names (Sarah, Catherine, Anne, etc.) and Nate is holding out against all of the names he deems too 'ghetto' (Aisha, Malaika, etc.). We'll see what happens. I like deciding pretty early on a name and then thinking of her by that name for a while...to see if it settles in.
Anyway!! 9 December...mark it on your calendar! 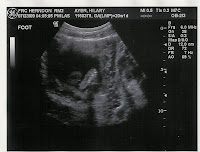 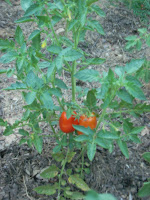 This has been a busy summer! First of all, the garden. I am happy to report that we are reaping the 'fruits' of our labors. Behold our tomatoes! We ate some this evening. Delicious. Also featured in the salad was a home-grown cucumber and in the lasagne, basil.

I'd say one of the most fun Saturday's I've spent in a long time was attending the wedding of our great friends Lindsay and Mike. I've known Lindsay for over ten years, back from our intern days (also pictured here are Noelle and Jenna, other dear 'Washington Semi-student' intern friends). 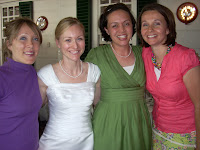 We all met Mike here in Washington, D.C., and finally Lindsay and Mike found love in each other. As you can see here, they incorporated some of Mike's Korean heritage in their wedding reception. 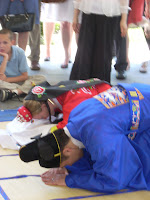 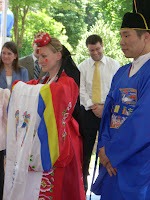 As I've mentioned previously, we've been making it to the pool as often as possible. While Nate swims laps, Mayumi and I splash around in the kiddy pool. Here is the Cuteness having fun in the water.

Posted by Jamila at 6:58 PM No comments: 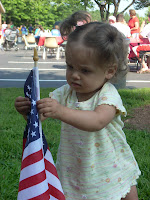 Eastern Market is home to a sub-neighborhood; Barracks Row. Home to the U.S. Marine Corp Band and Drill Squad, every Friday night of the summer the neighborhood boasts a huge performance. The streets are blocked off, 'free' tickets are made available at the beginning of the summer and gone within seconds, and Washington, D.C. residents turn out in high style.

Nate, Mayumi and I often ate out on Friday nights on Barracks Row and would weakly attempt to get into the 'standby line.' No luck. Especially not on the night that the President attended. We noticed that cars, parked on the surrounding streets, were being towed. Upon questioning some Secret Servicemen we learned that any owner of those cars would simply have to pick them up at a nearby lot if they wanted them any time soon. Needless to say, we never got a chance to see the Parade.

I've made a friend out here named Amanda. Amanda's husband is a Marine and actually has duty at the Parade each Friday night as an escort/usher. I was thrilled when Amanda said she'd get us tickets, and made it a surprise for Nate (arranging babysitting and the works). We went with Amanda, her husband Jesus, and our other great friends Rachel and Jeoff. It was a fun night full of pageantry and patriotic fanfare. Enjoy the following clip:

This was two days before the Fourth of July. On 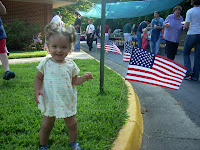 the morning of the Fourth we headed on over to the church for the annual breakfast. Here is the Cuteness exploring her patriotic side.

Later on that day we were excited to receive one of my best and oldest friends Marliss and her two adorable girls in our home. 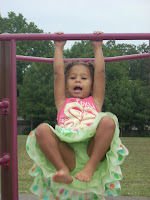 Here is Melia, the oldest of the two, at the ghetto park near our home. All in all, a great holiday.
In other random news, it turns out that Mayumi adores cheese. Here is a package of cheese I handed her without a thought in the grocery store to soothe her grumpiness. When I arrived at the register I found it...torn open and pockmarked by her razor sharp little teeth. That little cuteness! 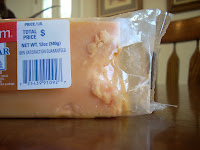 Getting ready for the Ivy League... 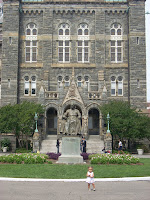 Nate's work is sending him to Georgetown for the summer and Mayumi and paid him a visit a couple of weeks ago. If you look closely, there is a cuteness standing in front of the hallowed halls of Georgtown.
When we're not jetting into the District, we are exploring Fairfax County. In nearby Reston is a cute 'planned' community known as Lake Anne. Here's Mayumi playing in a fountain near the lake.
Posted by Jamila at 9:43 AM 3 comments:

We are trying to take advantage of our mandatory membership in the HOA by making frequent visits to the pool. Mayumi is getting used to it, slowly but surely.