A Day in the Life of The Cute

Just a little cuteness to brighten your day.
Mayumi, it seems, is a girl to the very core. She was born hard-wired to pose...as you can see her doing here. Whenever she knows she's caught your eye, she puts on some kind of pose. 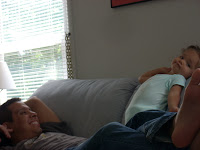 Here she is playing with her daddy... 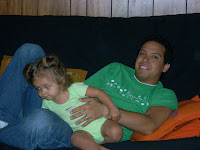 And here is she getting very excited about a wedding buggy we encountered in the Alkgonkian Regional Park. Everything is a 'cat' to her (although she only knows the word in Arabic), so Nate is explaining to her that this is a very BIG cat. 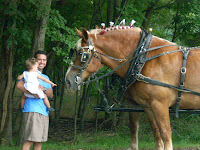 I've taken Mayumi to a nearby library's storytime, which ended this last time with bubbles. Mayumi seemed fascinated and tried, along with her peers, to 'catch' some: 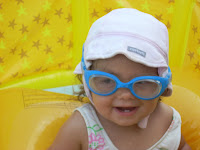 advantage of our community pool. Mayumi is always trying to eat Nate's goggles, so we found her a pair of her own.

This little girl finds all kinds of ways to be cute. Or mischievous. Ever since beginning to feed herself, she demonstrated a fondness for putting her food behind her back. We have no idea where she got this idea--obviously we don't toss unwanted food over our shoulders. And yet, she does it, leaving us no choice but to strip her down before particularly messy meals. 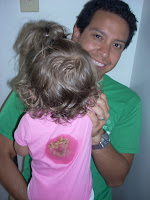 Why, you ask? Check out what happens if we don't. What you are seeing is the banana that Yumi sneakily stuffed behind her back.
Posted by Jamila at 11:04 AM 2 comments:

As mobile as is legal

Here's proof: she's learned how to do it!

You may not believe it, but I have other interests aside from Mayumi. 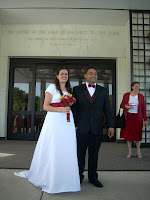 Friends...I have friends!! One friend in particular many of you know has my indefatigable travel partner-in-crime Heba. Heba married the love of her life on Saturday--a Samoan guy that we all met many years ago in Hawaii. She reconnected with him when she moved out here and, considering their shared interest in Polynesia, really hit it off. Heba was always into Polynesian culture, particularly Maori culture. Yet, when I first met her, I doubt she'd even ever taken a Polynesian dance class. Boy 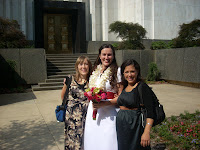 , have things changed. As you'll see from these video clips, she's practically given up her haole-ness and become a true wahine. (The clips are no longer than 30 seconds a piece, so please take a few minutes and watch them all!)

Her wedding was fabulous. Nate, my dear friend Marliss, and I went and enjoyed ourselves thoroughly. I took a few video clips--all are 30 seconds or less so they won't take much time to view.
Now, one last thing: Not only was I particularly interested in celebrating with Heba because I love her dearly, but also because I became rather 'involved.' See, she asked me and Marliss (who was staying at my home on visit from Florida) to put together some of the costumes for her wedding dance performances. I'll point out which ones we did:
IV>IV>
First--pictured here is Koko's son and Heather's new step-son Kopelani in his Maori 'Haka' costume. Marliss and I made the little loin cloth AND headress. 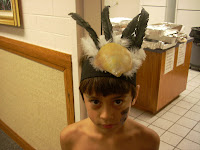 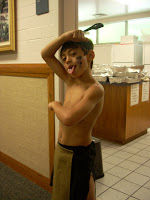 Marliss and I were also responsible for Heather's Tahitian costume, at least the grass skirt and 'belt.' This particular number is called an 'Otea,' and that is her new husband for whom she is dancing.

One of my favorite Polynesian dance numbers is the traditional Samoan slap dance. Here is Koko (groom, in the middle) and some of his buddies.

Finally--the dance number that had Heather the most worried. The bride, or a representative of the bride, is supposed to do this special dance titled the "Princess Dance" (in Samoan, that is). She was nervous to be dancing it in front of a bunch of Samoans...but did a MARVELOUS job. I had nothing to do this with this costume but wanted to include this clip. She started out the dance alone, but within SECONDS zillions of people joined her, dancing with her, and throwing money at her (or tucking it into her dress). It was just too much fun.