Next thing I know she'll be driving...

Mayumi is walking!! Halting, small steps, but walking nevertheless. This video begins right as she's stood up (straight from the ground, without holding on to anything). I've actually seen her walk further than she does here--up to ten steps. My baby is growing up!

Nate took great pains to prepare several surprises for me on Mother's Day. Not only did he take care of Mayumi all Saturday afternoon/night while I took off to D.C. to play with girlfiends visiting from New York, he prepared me breakfast and lunch on Sunday...and arranged this bouquet of flowers. 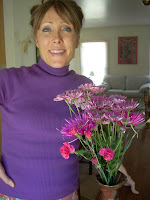 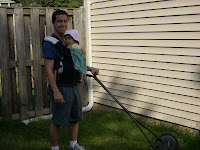 Speaking of flowers, we are working hard on our garden...and making feeble attempts on our lawn. Unequipped as we are with yard power tools, it is hard to keep up with the Jones', but Nate makes great efforts with our 'Nate powered lawn mower.' Mayumi enjoys helping out her father.
If only we could employ the same landscaping company that beautifies the D.C. Temple grounds. See this little clip below and admire the flowers and trees (if you can keep your eyes from the little cuteness in the white dress).
Posted by Jamila at 12:46 PM 3 comments:

Mayumi is sick, running a decent fever, and hasn't been herself. Yet--once I put her in this swing yesterday she was her old self again...as you will see.

You may notice a 'shaddow' across the bridge of her nose...this is, sadly, a massive bruise incurred by a fall against one of our end tables. Alas, the drawbacks of learning to walk. Mayumi IS starting to walk, tw0-three steps at a time.

We love taking Mayumi to the zoo, and although we aren't certain whether or not she really notices the animals, we think she has a good time. It just so happened that this day was National Migratory Bird Week.

See for yourself!! We'lll see if the garden will survive after all this rain.... 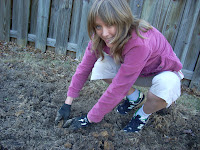 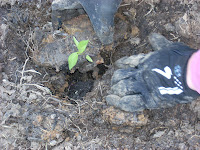 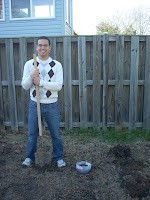 The muscle of this operation... 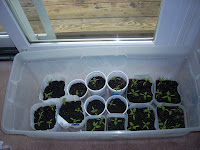 Our seedlings which we've cultivated indoors... 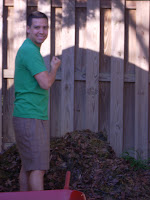 Composting!
Posted by Jamila at 12:52 PM No comments:

Oh the responsibilities of the blogger. You lie awake nights fretting about how backed up you are and how negligent you've been, keeping all your great photos on your hard drive. The following post is the equivallent of a long, disorganized 'catch-up' chat between two girls (guys don't do catch-ups I've learned from Nate). In no particular order...some things we've been up to lately: 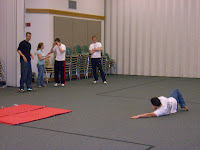 Nate, teaching a self-defense class at the church. 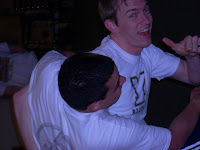 Nate, getting thrown by his now well-trained student. 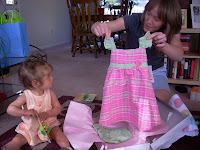 Me, helping Yumi open her Easter package from Nate's parents. Thanks Ayers!! 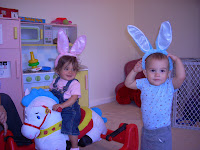 Mayumi with her future boyfriend Wyatt (son of Rachel and Jeoff, mentioned on this blog before) on Easter. 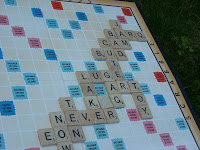 The first Scrabble game EVER that I've won. Look at some of the cool words! 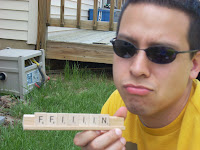 Nate took his loss with grace, showing us the deck of cards HE'D been delt. 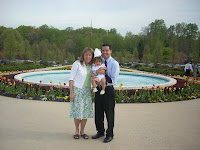 At the DC temple--gorgeous landscaping. 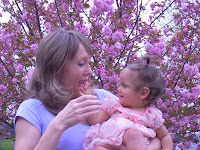 Me and my girl, frockling in the spring flowers. 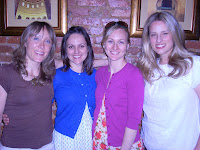 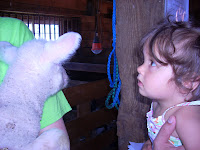 Lastly, Mayumi at a local farm "Spring Babies Day."
Posted by Jamila at 4:20 AM 3 comments:

In Tribute to Astroland (my father)

As has been noted, my father WAS in Arizona for our 'family reunion' in early April, but was not caught on film by me. By my regular camera, that is. I did get a great clip of him dancing with Mayumi, however, which follows. But first, a little background: my father, who is musically inclined, used to sing to us constantly. We each had our own, personally little song. He also had a song for most situations and did not hesitate to sing with gusto (he still does on the front row of church). One of my favorites was a little ditty I learned later was the "Hamm's Beer" jingle (randomly, as my father does not drink). Another was the Marine Corp hymn (he was never in the military). No, there's really no way to explain his huge repetoire but there it is.

The following is one of the things he 'sung' to us as kids, but it also included a dance. We called the song and dance "Dum Dum Dum"--I think you'll see why. Enjoy!