All I want for Christmas is...

Another girl! Three's definitely not a crowd (I hope). Haven't decided on a name yet. My favorite choice (Aisha) was immediately and vehemantly vetoed once again. We'll see if if we stick with the Japanese-Arabic combination. While I love it, Nate has rightly pointed out that I've chosen these last two times and he should have the chance to choose.
Posted by Jamila at 6:19 AM 5 comments: 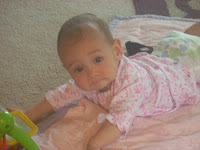 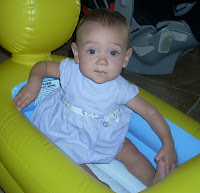 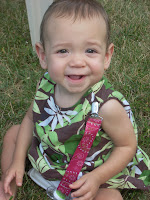 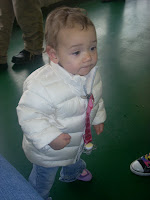 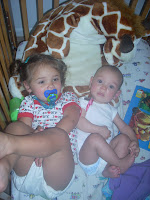 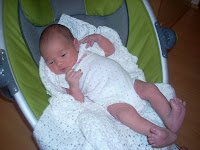 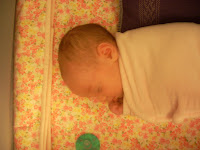 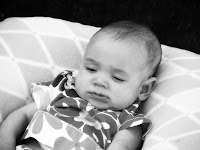 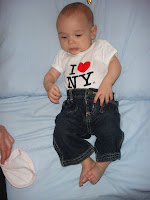 p.s. I can't stand the picture upload function in Blogger. Impossible to get pictures in the order you want them...so in spite of my best efforts, these pictures are NOT in chronological order. Alas! She's still darn cute.
Posted by Jamila at 10:33 AM 2 comments: If you ask Yumi these days who or what she is, she'll say: "I ballerina fairy princess!" She has only recently conceded that she is ALSO Mayumi.

We moved her to her "Big Girl Bed" the other night--with perfect success, no bedrails required. Notice the sheets! 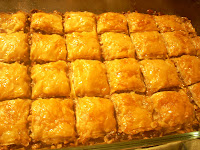 I wanted to do something different for Thanksgiving this year, to challenge myself. So, when my old roommate and dear friend Amber invited us to come up to New York for the weekend and stay in her neighbor's flat who was travelling--I felt we had to say yes. And so we went! Now--the travel to/from NYC was horrendous. Six hours each way, with Emi crying much of that time (and throwing up on the way back). Not fun. But many many aspects of the trip were great. For example: Thanksgiving Dinner, hosted by Amber and attended by 16 friends. This dinner was no ordinary Thanksgiving meal. Amber has a recipe testing project going on (learn more at 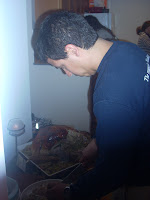 her blog: http://www.recipetestnest.blogspot.com/ ) and this meal was one of her famous twice-monthly 'Test Nests.' We all were asked to SERIOUSLY contemplate our taste buds and rate each dish. I contributed a dish of baklava, the score of which I do not yet know--but judge for yourselves from the photo. Delish. Nate graciously carved the SAGE INFUSED turkey. Emi and Yumi entertained the guests--every last one a saavy single New Yorker who probably hadn't been around a child in several years--but were very kind and cute with the girls.

I was excited to take Mayumi to the Macy's Santa Land. I was not very excited, however, when Mayumi threw a large tantrum in 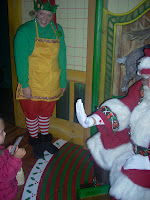 the elevator to the 8th floor and home of Santa Land. In spite of the fact that there were millions of people crammed into that elevator on Black Friday, Mayumi still found a way to lie down and throw a fit. Amazing. I could not actually get Mayumi to approach Santa Claus (a little overawed, I suppose). Not for lack of encourage by the extremely enthusiastic Elf. 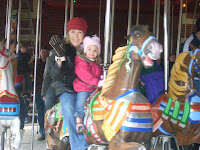 Good times were had, however, when we went to the Central Park Carousel. And Times Square. And on a jog through Central Park. And on the Staten Island Ferry (make sure to look in the background of this photo of Emi and me). 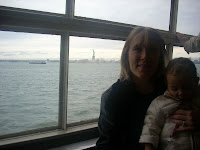 Definitely a highlight of the weekend was getting together with my dearest old friends Amber, Sally, Mala, and Mala's roommate (and new friend, Beth), to see a show! Women on the Verge of a Nervous Breakdown. Not the most amazing show, but featured some of our most favorite Broadway performers and we had a GREAT time. Thank you, Nate, for indulging me--and making this trip possible. Thank you Amber, Sally, and Mala for being excellent hostesses and great friends. 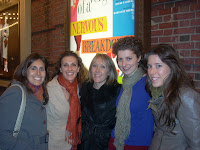 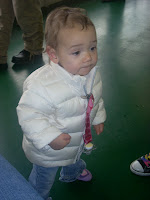 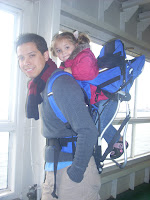