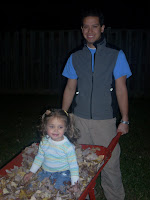 Thank heavens we found another way to upload photos from my camera (thanks, Nate!), because it would seem that our fabulous video camera has kicked the bucket. We got a LOT of use out of it--thank you to Nate's parents for presenting us with it. 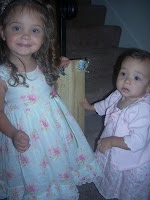 This may be a good time to include this darling picture of the girls in dresses given to them by Nate's mother, Grandma Mimi.
Earlier in October, the girls and I went with our good friends Nicolina and her two cute kids (Ethan and Cora) to an apple farm way out in the countryside. The kids had a great time watching the apples sorting, playing on the farm equipment, and selecting pumpkins to be carved later that month. 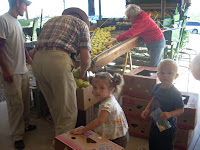 Can you believe I bought 4 bushels of apples? Yikes. I borrowed an applesauce maker from my good friend Rachel and starting cooking and mushing apples like my life depended on it. Two weeks later--30 quarts of applesauce. 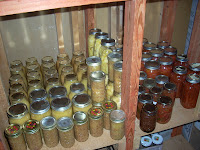 It was an ambitious project and I am not sure I'll ever do it again. But the applesauce sure is tasty! 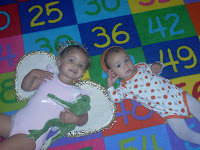 Mayumi was a "Ballerina Fairy." She grabbed her frog two seconds before the photo was taken-an absolutely perfect touch. Emi was The Littlest Pumpkin. Thank you to Stephanie for Mayumi's costume (she made the wings for Yumi's participation in a Christmas nativity last year and gave Mayumi the leotard and ballet shoes). Thank you to Grandma Rosalie for Emi's costume (the oneside and hat--gifts to Mayumi in previous years).

Wondering about that amazing rug upon which the girls are positioned? It is one part of our NEW and REMODELED basement. More pictures are forthcoming. 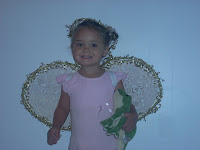 Of course, no Halloween would be complete without some pumpkin carving. I did not take any photos of the event this year, but we had a great time doing it with Mayumi's BFF Juliette and her family. Here are the resulting Jack-O-Lanterns: 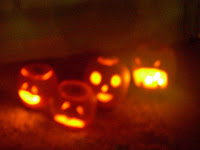 From right to left: Nate, Hilary, Mayumi (who was cranky when hers was being carved), and Emiko.

And finally, a bit of nostalgia: 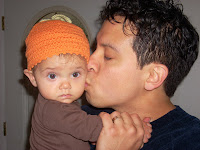 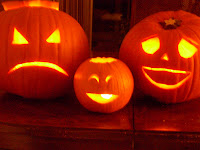 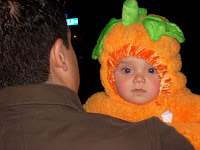 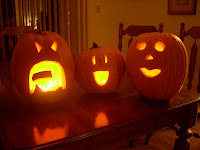 i love the pumpkins. especially 2007.