Knowing I would want to get out with the two girls as soon as possible, I decided to get a double stroller before Emiko was due to be born. I thought. I fretted. I researched. I started to dream about them...double strollers dancing through my dreams. I even considered NOT using a double stroller and relying on my fabulous Ergo baby carrier (featured below) to carry Emiko. 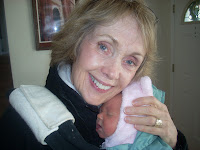 But finally I decided on the Phil and Ted, which I obtained used. I won't say how much I paid for this pricy bit of metal and fabric...it is AMAZING how expensive these babies are. Below is Emiko in the bassinet seat...you have to look cosely to see her! 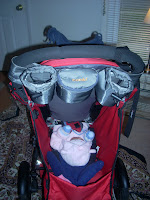 Here's Mayumi in the top seat. You'll note that the special 'point' of the Phil and Ted stroller is that it is neither double WIDE nor double LONG. The seats are 'in-line.' Some say the kid in the back gets the shaft...but I have high hopes. 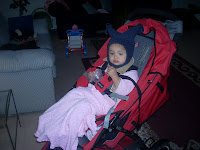 Mayumi's paternal grandmother Rosalie (Mimi) was concerned that Mayumi might want her own baby to match mine. She kindly rushed off a package containing a baby doll complete with all kinds of accessories. Mayumi loves it (her?) and takes (and puts) her everywhere: 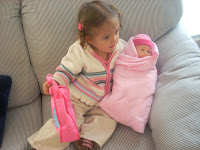 This is where we found her one morning: 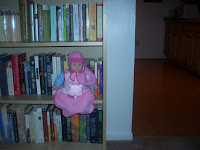 thanks for the cute christmas card. LOVE your girls!

It's been fun catching up on your family and the new addition. How great! I must say you made a fabulous choice in a double stroller-I would have one myself if I were able to find one secondhand, but I haven't been able to yet. ALL of my friends in California have one and LOVE LOVE LOVE it! I think I may have to give in and get one whenever we have another child. Glad you are doing well. I hope you all had a wonderful holiday!