Hi everyone. This is Nate typing. Hilary was uploading photos for a post that she intended to write later and I guess I must have hit the publish button or something before she was done. Hilary is busy at the moment and so she wants me to explain what is in these photos.

That sums it up. But in greater detail, we have here approximately 24 inches of snow covering everything in the mid-Atlantic seaboard. And I had to shovel it. And it seems like I'm the only one in Virginia who feels any kind of moral obligation to shovel his sidewalk. But I digress. The snow-shoveling habits of my fellow Southerners are not the point here--the point is the snow itself.

Snow. And a lot of it. Enough to keep roads closed for days. Enough to close the federal government two full days afterwards, and give a "liberal leave policy" after that. Enough snow to make Hilary push the stroller through the street because people are too lazy to shovel their sidewalks. But I digress.

On a happier note, snow can be lots of fun. See the exhibits below as evidence. 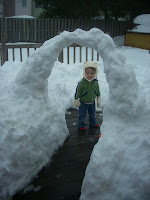 Here's a little snow house I built on our back porch. This is after a week of melting, by the way. 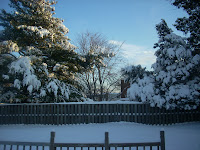 Here is our back yard as seen from the dining room. 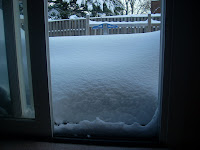 Same location, closeup of what's right outside the door. Notice the 24-inch strait edge ruler sticking out of the snow. 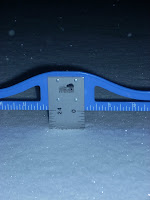 This photograph was not faked. That is indeed a 24-inch strait edge ruler pushed up to the hilt in snow. 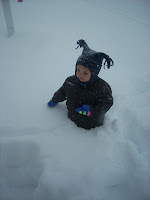 And this is the cutest little yuminess in the whole world playing in the snow.
Posted by Jamila at 11:53 AM

I LOVE it when it snows in D.C. Mostly because they shut the city down which means no school/work. But also because it's beautiful beyond belief.

Hey! I just found your blog. Very randomly. Congratulations on your cute new girl! I'm sad I didn't get to see you when I spent the night at your house :) but it was so fun seeing Linds and your mom and meeting Mayumi. I hope you're feeling great and that you had a merry Christmas. I'm just up the road if you ever need anything! Take care.