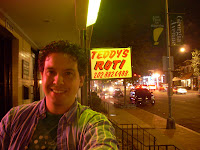 I had so much fun planning Nate's birthday this year. See, I like surprises. I like LOTS of surprises. So, when planning a birthday for someone, I may go overboard but I have so much fun doing it. Thanks to my dear friends Lindsay and Heather, we left Mayumi in safe hands and 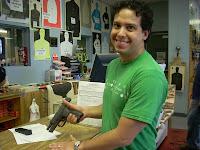 were able to go OUT...alone. I took Nate to a variety of places to which he had, at one time or another, expressed in going. Having a memory like a steel trap, I catalogued all of this and incorporated it into a three day birthday extravaganza. We dined at Teddy's Roti Shop (Trinadadian restaurant featuring Indian food. where they convinced us to buy an expensive "aphrodisiac drink" that turned out to be eggnog), indulged in a decadent slice of 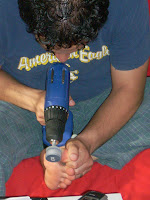 "Neil's Hat Trick"from Cake Love, went to "Family Day" at Nate's work, joined the Virginian Redneck Society at shot a couple boxes of ammo at the Blueridge Arsenal, stopped in at the National Geographic Society, and topped it all off at the Washington D.C. Film Shorts Festival at the E Street Cinema. Nate treated himself to a pedicure--his latest invention and sure to become a big hit at a spa near you.