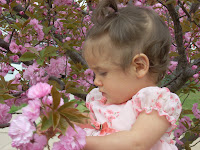 Mayumi climbed our staircase today while I wasn't looking. Seven stairs, not an inconsiderable height. Ugh. I had a student come while she was awake (usually she naps during my lessons) and I started her out in the swing next to our lesson table. This has worked fine in the past, but apparently now that she can walk she will NOT be confined to a somewhat stationary chair. Sigh. I apologized to my student and released Mayumi to wander about the room while I attempted to teach a lesson. Considering how noisy she can be, I was relieved when she went behind the little wall the separates the main room from the stairwell going up. I was even happier to note that she was silent, and figured she was having fun playing with some toy on (I hoped) the bottom step. Knowing that she has a tendency to try to climb the stairs, I strained my ears in her direction while attempting to simultaneously teach an Arabic lesson. Nothing--not a sound. When I finally heard a sound a few minutes later, it was clearly not from the downstairs. I excused myself to my student and dashed to the stairs; that little baby was no where in sight! I dashed upstairs and she was playing far across the room. She had climbed up the stairs entirely on her own!
Now don't worry; I don't plan on giving her free range to the staircases but I was actually quite proud of her (while also terrified of what could have happened...).
Posted by Jamila at 10:59 AM

Wow that's great. She's really racking in those milestones these days. Oh I made my blog private, so if you would like an invite email me at mouse3337@aol.com.