Nate has a new love. Sometimes I notice him regarding his new paramour lovingly 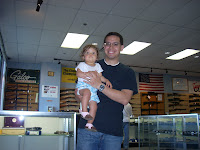 , but I'm not jealous. Hard to feel jealous of a ten-pound rod of steel. The sights may be made of hard plastic--I am not sure.

For months...years...Nate has been DYING for a gun. Little did I know how I would inflame the desire by taking him to a shooting range for his birthday last year. Our new home happens to be relatively close to the range, so occasionally Nate would ask me accompany him to the range store and, I suppose, tolerate his longing looks and loving strokes of all the 'ladies' in the shop (why do guns have to be female I wonder?). We finally decided (emphasis on we--Nate definitely consulted me on this) that he should have his heart's desire, and one day she arrived to her new home. Our home. 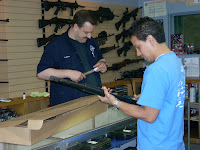 For those of you out there worried about Mayumi's safety, you are not alone. Nate has agreed to keep the gun unloaded and locked (although in the closet near our bed). He is anxious for Mayumi to start her gun safety training but I am opposed to her early exposure to weapons more on ideological grounds than an actual worry that she'll figure out how to climb up to the top of the closet, unlock the gun, load it, and fire it. Those who know us well will not be surprised to find that we disagree on the utility/need/wisdom of owning a gun, but we both agree that if someone has a (legal and moral) passion then they should pursue it. So--we have a gun. Well, correction: Nate has a gun.

Enjoy (or tolerate) the following pictures and video clips.

The following clip is of Mayumi at the shooting range, following around the 'range dog,' named (curiously) Darth Vader. Darth was terrified by the very fascinated and (hee hee) doggedly pursuing Mayumi.

Wow Hil. You are brave. Maybe it is because we didn't grow up with a gun in the house. Well, except when dad bought that BB Gun to shoot the deer when they ate the landscaping. I don't blame you for being a little nervous. Even though it wasn't loaded it was still scary seeing Yumi touching that thing.

we don't have a gun...makes me nervous too!
I love all those cute pics from NY and your little mayumi is getting so big!!

Hey, if Nate ever needs a gun fix he can come to our house. Corey has an AR-15, AK-47, 270 and a bunch of other handguns. Glock, Beretta, Springfield, Walther. He goes shooting all the time ;)