Yes! We have no bananas.

We like bananas. Mayumi ADORES bananas. We have been known to go through over 12 bananas a week, and that is if ration them.
Bananas are a healthy portable snack ideal for toddlers--but they also come with a price. Our banana consumption alone doubtless contributes at least half of the GDP of a Central American country, but are these Banana Republics better off? Probably not. At anyrate, no one grows bananas around here, so it is off the list this month.
What is on the list? Check it out: 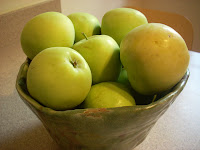 It isn't QUITE ideal apple season yet, but one particular variety are popping up at that markets--a tart variety, good for baking. I used them to make baked apples (ala mode--homemade icecream with SMC milk and half-and-half) and sweet apple bread (baking now--pictures forthcoming).
Speaking of dairy, Nate made some yoghurt the other day. 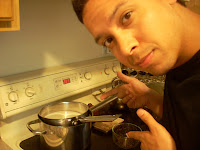 He used to make it all the time during his mission in India. 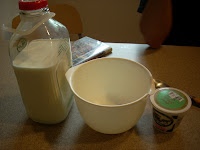 We used SMC milk and yoghurt to make MORE yoghurt. This SMC yoghurt is DELICIOUS and quite runny (think 'drinkable' yoghurt. I guess that particular bacteria is 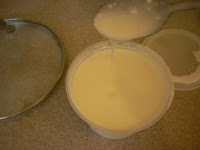 just runny...because that is what it made: more runny yoghurt. No complaints there; we all (especially Mayumi) love it. The finished product is here to the right.

Remember the mustard disaster? Well, who needs mustard anyway, when you can make 'Glo's Goddess Dressing.' My mother made up this receipe based on the famous Annie's Goddess Dressing she loves to buy but wanted to make herself. I eliminated the olive oil to make it thick. It is DELICIOUS, and the recipe follows:
1/2 C. canola oil (I normally use olive oil when I make it for salads)
1/2 C. tahini (sesame seed butter)
1 t. minced onion
2 T. apple cider vinegar
1T. soy sauce
1 t. lemon juice
1 T. Garlic
1 T. sesame seeds
1 T parsley flakes
DELICIOUS! See the photo (the parsley in the foregroun is from our garden): 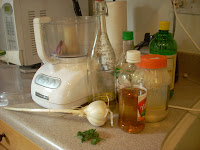 Speaking of disasters--end blossom rot! We have it! Or, to be more precise 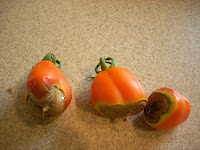 our tomatoes have it. Look at these pitiful vegetables! 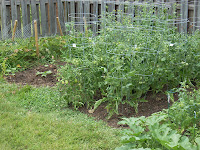 As you can see, our garden look awesome. The basil is growing well, the pumpkins are getting bigger...it looks like we can't complain. But the tomatoes--every single last one even the still green ones--all have have end blossom rot. I haven't the faintest idea WHAT that 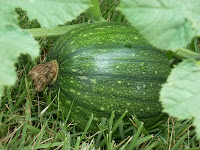 is but when I described the problem to someone they nodded sagely and diagnosed it. Sigh. Our tomatoes last year were so beautiful (still enjoying the dried tomatoes). Thankfully the professional farmers seem to know what they are doing, 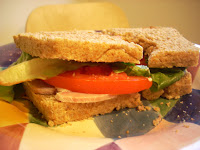 because I can't have a sandwich without a tomato.


Speaking of tomatoes--we put some of our sundried tomatos on top of our pizza last night! So here we have totally local pizza: whole wheat crust, 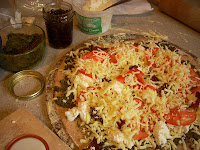 homegrown and canned sun-dried tomatoes, local mozzerella and ricotta, tomatoes from the Farmers' Market and homemade pesto with homegrown basil. YUM! And for dessert-baked apples and homemade icecream. 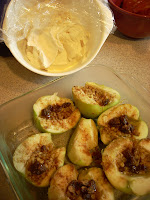 Speaking of herbs, we used some of our garden grown parsely for a wicked awesome soup the other day. 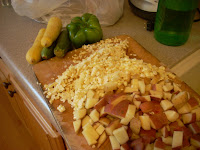 Local zucchini, potatoes, corn, bell peppers and SMC half and half, along with some whole wheat rolls 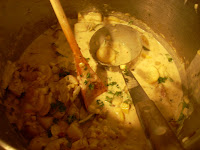 that Nate says were my best to date. This chowder is a Rachel Ray recipe. 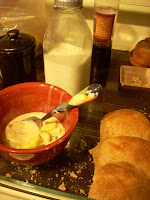